Take a good look, because here you have one lucky boy! 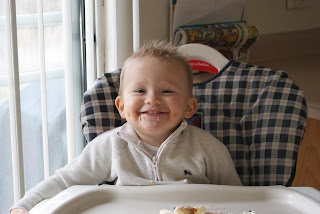 Carson has the world’s best big brother! This is not the first time I have said this, but I was looking through my pictures the other day and almost every other one is of Dillon and Carson, not just one or the other. They truly love each other, but Carson especially loves his big brother! We have been playing a game in the car when you see a yellow car, you say “bingo”. Dillon was telling everyone there score (randomly picking number that is) and we asked what Carson’s score was, he told us it’s the same as his because he wanted to share all his with his brother. Last weekend Dillon went to his Grandpas for a sleepover with some cousins, he came home and his cousins told me the whole time he was telling them that he is thinking about Carson and he misses him and wanted to come home. The first words out of Carson’s mouth when he wakes up from his nap is “Dill-O”, and he will say it over and over until he gets his “Dill-O”. The other night I was in the middle of dinner, and Carson wanted my hand (he will ask for your hand and lead you to what he needs) I told him to hold on a sec, and sure enough, Dillon came running to the rescue and took Carson’s hand to help him get the truck he wanted. I could go on and on, but you might be getting a little jealous, so I will show you a couple more and be done with it…. for now anyways.
Dillon giving Carson a ride on his new bike 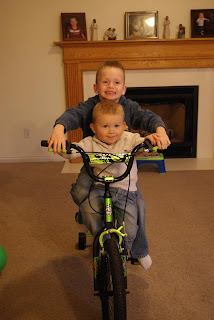 Dillon reading a book to Carson, which Carson LOVES! 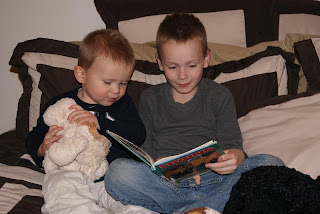 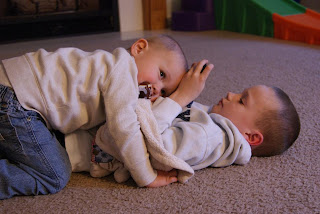 The morning ritual of sitting in mom’s bed and watching T.V. 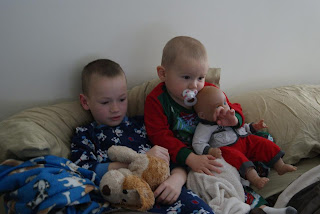 The boys watching the construction going on next door 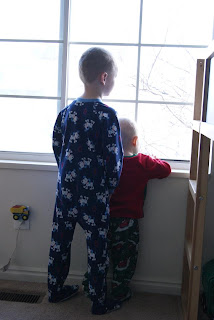 They seem like SUCH great boys. You're raising them well :)