April 17th, 2011. This is the last day Carson saw his Binky. I have given all my kids (because I have so many of them) until the age of two to have the binky, but Carson was just REALLY attached to it and it drove me nuts! I decided to get an old binky and cut the end off (the same way I got Dillon off his). 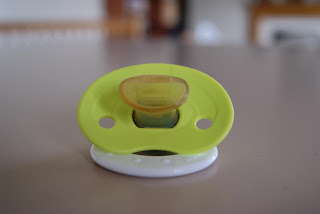 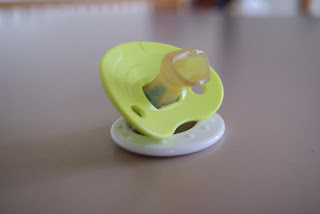 I hid the other ones and gave him this one when he asked. He put it in, pulled it, looked at it funny, stuck it back in and went on his merry way. As the day grew long, he was getting annoyed with it and for nap and bed time, he would throw it back at us when he was given it. On Sunday, we went running around and he wanted nothing to do with it. I dropped the boys off, left and went to go run around some more. When I got home I noticed I still had it in my car. He had gone down for his nap without even asking for it. I decided to hide that one too, and that was the last he saw of that. My poor baby, I’m a little sad, but happy to see his darling smile without the blasted binky! 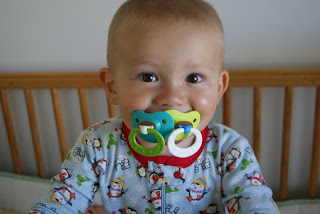 you know, you too loved your binky...

Wow you are brave! I waited until Avie was at least 3.... it was such a comfort and I didn't mind her having it.... it saved me many times in the middle of the night. But alas the 'binky fairy' came and we traded binkies for a Tangled present.

But didn't Heather like to such on the other side of the binky? Or am I confused.

That Carson is so dang cute.