Tires
We were eating taco’s the other week and Carson keep pointing to Chris’s plate and asking for “tires”. When we finally figured it out, he was so happy to get what he was asking for : ) what a cute and imaginative little boy! 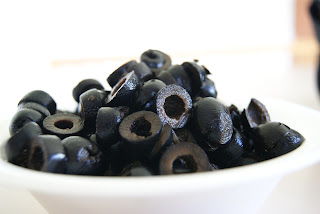 This was left on our bed on night after we put Dillon to bed. I don't know if you can see the note on the bottom but it read something like this:
"Dad I love you so I want you to have my pillow so you have a good sleep"
What a sweetheart! 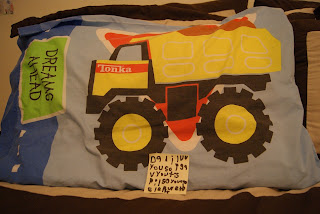 The other morning I was finishing up getting ready and told Carson to go grab the cereal he wanted for breakfast. He has done this may times, and will usually pick out the one he can grab the quickest. He has never been too fussy on what he eats. He brought me frosted flakes, I said alright and headed off to the kitchen to make the boys there breakfast. To make life easier on me and Carson I just decided to grab him some captain crunch berries. It’s bigger for him and doesn’t get too soggy so it is easier for him to eat. Like I said, I have switched his cereal choice MANY times and he has never before said anything, he is just happy to eat. He was so excited for his breakfast, licking his lips and everything! Grabbed him, sat him in his highchair and he grabbed the spoon but quickly looked at me with the cutest most puzzled face; no, not that one he said. He pointed to the frosted flakes and said that one, that one please?!? It was so precious! Of course I gave him a new bowl with the frosted flakes in it, and he happily ate every last bite! That was the day I learned he knows what he wants, and how fast he is really growing up. : ( 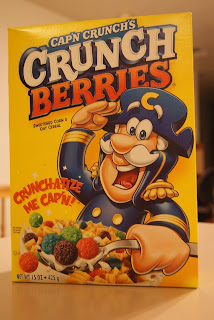 What sweethearts. I love the "tires" story. And the note Dillon left is precious. I wish I could be spending time with them. They are both darling and they will be all grown up before we know it.